Enjoy the first three electrifying spy thrillers in the Justin Hall series from Ethan Jones, the master of international intrigue and bestselling writer. Join Justin Hall as he embarks on his heart-stopping international missions that will leave you breathless. 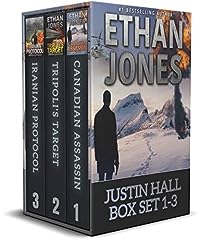 Meet Justin Hall, a deadly covert assassin working for the Canadian Intelligence Service. He never listened at home; or at school… Why would anyone think he’d listen now? But no one’s better at getting the job done. Justin serves alongside his red-tape ripping partner Carrie O’Conner, and together they’ll stop at nothing to make sure justice is done. Dispatched to execute near-impossible missions with no time, no back-up, and no options. If you love adrenaline-drenched, heart-pounding suspense, you need Justin Hall…

When an act of treason leaves Justin and his Arctic team stranded on the ice, they must fight for survival in a deadly battle at the top of the world.

Demoted and demoralized Canadian assassin Justin Hall is desperate to return to field operations. When the agency learns about a potential enemy incursion in the Arctic, he volunteers for the mission. Tried and tested as never before, not knowing the enemy within, he’s entangled in a devious treasonous plot…

Betrayed, disarmed, and left for dead, how will Justin save himself and his country?

How can they stop an assassination if they’re protecting the wrong man?

Justin Hall and Carrie O’Connor are Canadian Intelligence Service elite operatives in North Africa hot on the trail of an assassination plot. The intelligence comes from a questionable source, swearing the target is the US president.

Suspicions point to a powerful terrorist group bankrolled by an untouchable Saudi prince. What’s worse, Justin and Carrie discover something is crucially wrong and need an ingenious solution. Can they stop the Saudi prince, dismantle the plot, and save the life of Tripoli’s target?

Betrayed by one of your own…

When the defection of an Iranian nuclear scientist is compromised, CIS spymaster Justin Hall suspects this was an inside job. Unsure who he can trust within his agency, he begins a dangerous game, and soon becomes ensnared in a web of lies and deceit.

When a piece of intelligence points to his former boss, Justin is left with no other choice but to go rogue, forging alliances with a sinister Russian oligarch and Yemeni insurgents. How will Justin find out who has put the entire agency in jeopardy and is working with the enemy, when they anticipate his every move?

“I like the way Ethan writes. Excitement on every page! Give me more!”

“A non-stop, roller-coaster ride of firefights, explosions, and traitors.”

“Move over Flynn, Child, and Thor, you have a new neighbor. Very enjoyable reads.”

“Justin Hall is part Bond, part Bourne, and all action.”

In the vein of Vince Flynn and John le Carre, with clean, explosive plots, and guaranteed non-stop action.