Luke Irontree minds his business and leaves mortal humans alone. But if you’re a vampire, he has a magic sword and a silver-inlaid stake for you. Grab your copy today of the Luke Irontree Urban Fantasy series by C. Thomas Lafollette that some readers have described as wonderfully imaginative with writing that shines! Enjoy! 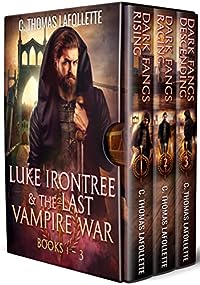 Every night, the immortal vampire slayer haunts the streets of Portland, hunting vamps and protecting innocent people from becoming vampire chow. Then, he goes home alone to his quiet house and his cat, Alfred. This is his life.

But when he runs into a local werewolf pack, he has two choices – continue his lonely hunt or a take a chance on making friends. Allies would make the job easier, especially with hordes of bloodthirsty vampires flooding the streets. However, trusting means opening himself to betrayal and loss.

Luke might not have a choice though. With homeless people disappearing off the streets, 20-somethings being snatched from night clubs, and heavily armed vampires flooding the streets, he must risk everything if he wants to save Portland from becoming a vampire wasteland…

This box set contains 3 full-length novels plus an exclusive bonus novella and novelette. 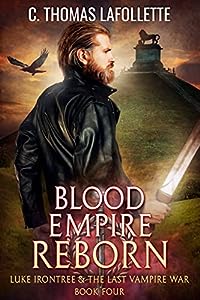 Luke Irontree has hunted vampires all over the world, but now it’s time to return to the land of his birth.

When an ally calls for aid, Luke and his werewolf friends must respond. Vampires are attacking his friend’s pack, and they suspect treachery from within. As soon as Luke and his crew land, the vampires strike, kidnapping his friend. Luke is forced to go underground, relying on the protections of an ancient god.

Now Luke and his team are on the run, eight people in a sea of enemies and allies with unknown loyalties. They have no idea who to trust. Hunted across multiple countries, Luke is left with nothing but desperate choices if he wants to make it out alive…