The Time Is When?

My sweet ladies seem to be having quite a bit of fun on the farm. My friend had posted pictures of yet another kids b-day party with kids feeding all the cute goats, horses, chickens, and of course the adorable piggy Charlotte. I miss my sweet ladies terribly and I don’t know exactly what I am going to do. The rat problem has definitely improved. So the question is… what next? 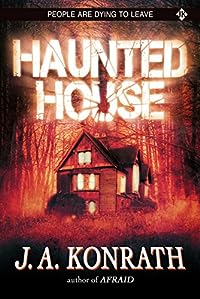 Haunted House – A Novel of Terror (The Konrath Horror Collective)
by J.A. Konrath

BEYOND AFRAID…
It was an experiment in fear.

Eight people, each chosen because they lived through a terrifying experience. Survivors. They don’t scare easily. They know how to fight back.

BEYOND TRAPPED…
Each is paid a million dollars to spend one night in a house. The old Butler House, where those grisly murders occurred so many years ago. A house that is supposedly haunted.

BEYOND ENDURANCE…
They can take whatever they want with them. Religious items. Survival gear. Weapons. All they need to do is last the night.

But there is something evil in this house. Something very evil, and very real. And when the dying starts, it comes with horrifying violence and brutal finality.

There are much scarier things than ghosts.

Things that will kill you slowly and delight in your screams.

Things that won’t let you get out alive.

HAUNTED HOUSE by J.A. Konrath
People are dying to leave. 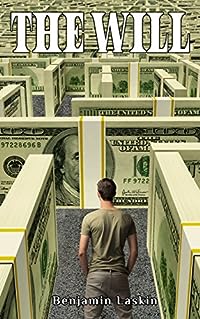 The Will
by Benjamin Laskin

Putting the will in willpower.

Josh McCain has two years to reinvent himself. Stripped of everything that made life a swanky, booze and babe-filled breeze, Josh embarks on a grueling and often hilarious two-year regimen of self-discipline that targets his mind, body, and spirit.

Along the way, skeptics mock him, his own past taunts him, and saboteurs resolve to stop him. But Josh is determined to complete his “bucket list from hell,” and prove that who he was is not as important as who he can become. Operating in unfamiliar territory, Josh turns to a cast of endearing characters to aid him on his secret journey–persons he’d have previously shunned.

Upbeat and inspiring, The Will is an enthralling story of goofs and grit, of the regenerative power of friendship–and if Josh doesn’t blow it–maybe love, too. 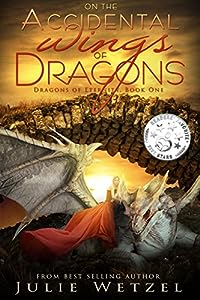 “Action packed with amazing characters, intense passion and high stakes, On the Accidental Wings of Dragons by Julie Wetzel is an engrossing, thoroughly entertaining read – a complete package of incredible action and sizzling romance.” ~Melinda Hills for Readers’ Favorite – 5 stars

When Michael Duncan is sent to investigate the disappearance of several dragon subjects, he finds himself in a bind. Locked in a dungeon, his only hope lies wrapped in a bundle of cloth tossed at his feet. One kiss and his life is changed forever. Hunted by his own people for crimes he didn’t commit, Michael has to learn a whole new life at the hands of a beautiful woman. Can she help him clear his name, or will just being in her presence get him sentenced to death?

Carissa Markel doesn’t know who this man chained to the wall is, but he’s her only chance for escape. She has power, but, born without a voice, she lacks the means to wield it. One choice, made in desperation, sends them running for his life. Does she have the strength to help him clear his name? And what will her brother, the King of Dragons, do if he finds out what she’s done? That’s immaterial, the real question is… can she keep her hands off him long enough to find out?

LOVE IS IN THE AIR! ALONG WITH RAGE, HATRED, AND MURDER…
A really great combination for mystery readers who love a dash of romance! Fans of this slightly psychic cozy series will be thrilled to hear that retired psychologist Promise McNeal’s about to marry her mountain man, Daniel Allen, right about… now! The lovebirds (along with Daniel’s daughter Susan) have flown from their North Carolina home to St. Simon’s and Jekyll Island, Ga. in search of the perfect wedding venue.

But all is not well in paradise. On the Golden Isles, they find evil dressed in a summer tuxedo, a cursed Chinese chair that’s also a World War II relic, the ruthlessly ambitious TV talk show host Aileen Wang, and the secret of a sixty-year-old murder rising from the coastal fog. Really… what’s not to like?

And yet… author James has more up her sleeve. Just as the wedding party assembles, someone shoots first Aileen and then kills two possible witnesses. With that, Promise trades in her bridal veil for trenchcoat, fedora, and the famous intuition that makes her such a talented amateur detective.

Though not exactly qualifying for Miss Marple-hood or Jessica Fletcher status in terms of age — she’s only in her fifties — Promise will satisfy the kind of fan who loves to see a female sleuth of a certain age (and gentility, of course!) kick posterior, as Promise herself might say.

She’s sure to appeal to fans of cozies, especially those by Julia Spencer-Fleming and Louise Penny, and those with a light sprinkling of psychic suspense; admirers of amateur sleuths and their close sisters female private investigators; readers of supernatural suspense and psychic detective fiction of all sorts; and especially to fans of other great North Carolina mystery authors like Margaret Maron, Barbara Neely, Elizabeth Daniels Squire, and Vicki Lane.

This is the THIRD Promise McNeal mystery, 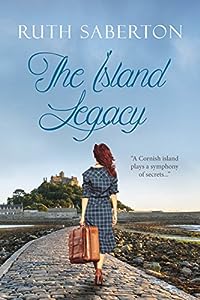 The Island Legacy
by Ruth Saberton

Ness Penwellyn always struggled to feel settled and now her life has taken an unexpected turn; she is the heir to the ancestral family home in England. Ness exchanges her American life for a castle set on a Cornish island and swaps solitude for newly discovered relatives – some more pleased to learn of her existence than others.

Inheriting vast debts alongside the castle, it isn’t long before Ness encounters property developer, Max Reynard. Wealthy and wickedly handsome, Max is accustomed to getting his own way. His assumption she’ll sell to him only makes Ness more determined to find the strength to go it alone – even as bitter cousins plot and circumstances spiral out of control.

Before long Ness and Max are locked in a battle of wills as the castle’s past and present collide in the fight to preserve its future. Soon Ness must decide who she can trust with both the island legacy and her heart…