The Ride of Your Life

Well written, fast paced and a lot more than I bargained for, this collection from Gregg Bell will have you hooked right from the beginning. Bell yanks you into the story and keeps the action going so that you don’t want to let go. Enjoy! 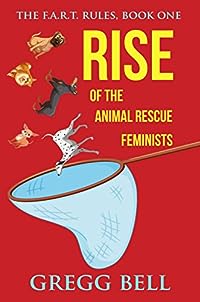 Rise of the Animal Rescue Feminists (The F.A.R.T. Rules Book 1)
by Gregg Bell

Lainey Tripper is a whiskey-drinking hard-living animal rescue feminist. But she has just this one little problem: she can’t seem to stop killing men. Not all men are so bad, and not a few of them are attracted to her, but when Lainey leaves a rescue, dead men are invariably left in her wake.

Lainey heads FART (Feminist Animal Rescue Team), a group of women dedicated to stopping the villainous Donovan from oppressing women and animals. But now Donovan, intent on world domination, has taken his evil to a new level. He’s systematically stealing Chicago’s dogs to sell them to a foreign power.

In Lainey’s enthusiasm to stop Donovan, she again kills a lot of men. Her fellow FARTers plead with her to moderate her man-killing tendencies, but Lainey’s pretty sure any guy she kills deserves it, and besides, she must do whatever it takes to save Chicago’s dogs.

Will Lainey stop Donovan in time? And when she’s done, will any men be left alive?

What readers are saying about Rise of the Animal Rescue Feminists:

‘best read whilst sober but pondered whilst drunk.’ — R. Campbell

What readers are saying about Saving Baby:

‘Suspenseful and edge of my seat action. I cried and cheered Annie on and I hated to see it end.’ — Kindle Customer 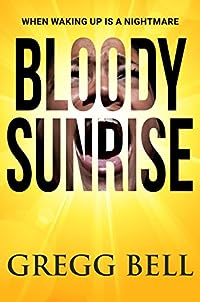 Denny O’Callaghan is afraid to open his eyes.

He’d been out drinking last night with the guys, and his head throbs, his arms hurt, and he can’t remember what he’s done.

He opens his eyes. Blood. On his sheets. His pillowcase.

Then he gets a call: his ex-wife was murdered last night.

He desperately tries to piece together what happened. But he can’t explain how he got the scratches on his arms, the police want to know about the domestic violence report his ex filed against him, and his buddies say he was raging against her last night before he stormed off on his own.

Right about the time she was murdered.

What readers are saying about Bloody Sunrise:

‘My involvement was total… I read this book straight through twice.’ — suziqnb

‘Read in one sitting (family had to fend for themselves). Warning: If you start this at night plan on losing sleep!!!!’ — Karen

I Love You I Kill You: A riveting suspense thriller
by Gregg Bell

Paul Mancari is going to kill his ex-wife.

He’s a Mafia hitman, and he got the contract because his ex had been dating the mob boss and couldn’t keep her mouth shut.

Paul’s a stone-cold killer, but there’s just one problem — his feelings for his ex haven’t died.

Under pressure from the mob boss and struggling against his own conscience, Paul scrambles to find a way out of killing her.

But all he finds is if she isn’t dead in twenty-four hours, the next hit will be him.

What readers are saying about I Love You I Kill You:

‘From the moment this story opens, you know you’re in for something special.’ — Craves The Angst Book Blog

‘So intense I read into the wee hours… it just gave me chills.’ — Carolyn T.