Today we have a wonderful collection of novels from the publisher of the #1 Amazon bestselling A Timeless Romance Anthology series in Clean Romance. Fans of clean and wholesome historical romances are sure to fall in love with these beautifully written novels. Enjoy! 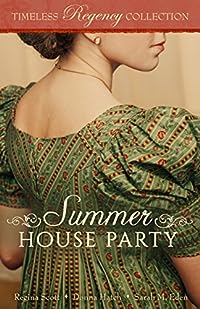 From the publisher of the #1 Amazon bestselling A Timeless Romance Anthology series in Clean Romance.

AN ENGAGEMENT OF CONVENIENCE by Regina Scott: Kitty Chapworth is nearly a spinster, and an orphan living on the charity of her uncle, with nothing to recommend her for the marriage mart. Her primary purpose is relegated to acting chaperone for her cousins until she can see them successfully married. Kitty remains focused on her duty even though she knows her future is bleak. When Quentin Adair returns from a long ten years working in Jamaica and proposes a wild charade to Kitty, she agrees, although the plan might reawaken her old feelings for Quentin. Can a reformed rake convince the perfect chaperone to overlook propriety for love?

A PERFECT MATCH by Donna Hatch: Genevieve attends a summer house party hosted by her best friend who can’t wait to introduce her to a gentleman she wants to marry, Christian Amesbury. After meeting him, Genevieve determines Christian is perfect… for her. Torn between loyalty to her best friend and the yearnings of her heart, Genevieve must first escape the attention of a powerful lord who’s obsessed with her and who tries to rob her of any hope for a happily ever after.

THE PAUPERS’ HOUSE PARTY by Sarah M. Eden: It’s a rare event that Edward Downy and his brother are invited to a house party by a member of the ton. But when they arrive, Edward quickly realizes this house party is different than any other. All invited guests are quite destitute, fallen members of Society barely hanging onto their homes. The hosts of the house party, the Warricks, then make a stunning announcement — they intend to gift all their properties to one fortunate guest. As the guests race to impress the Warricks, Edward finds a fast friend in Agatha Holmwood, who shares his same aversion to the horrible expectations. But their growing fondness for each other only makes the game more painful. 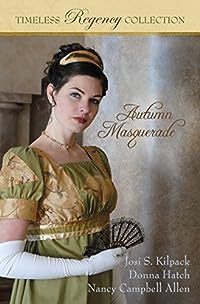 A MERRY DANCE by Josi S. Kilpack. When Lila overhears her uncle talking about a man coming to look for property in the county, she doesn’t think twice, until her uncle says he hopes Lila will find enough interest to marry the man. How can she marry someone named Mortimer Luthford, not to mention that his advanced age of thirty-three, and especially since she’s already in love with her absent cousin Neville? But when Mortimer arrives, Lila has to try every trick known to women to act not interested in the rather fascinating man, which proves a very difficult façade to maintain.

UNMASKING THE DUKE by Donna Hatch. The last thing Hannah Palmer wants to do is flirt with men in a crowded ballroom, but when her sister throws a Masquerade Ball, Hannah can’t say no to the invitation and takes comfort behind a mask. She dances with a charming masked man, matching him wit for wit. When the glorious evening culminates in a kiss, and the two remove their masks, Hannah is horrified to discover the man she’s been flirting with all night is her most despised neighbor, the Duke of Suttenberg. No matter how charming the duke was at the ball, and how wonderful the kiss, he is the last man she’d ever accept.

WHAT’S IN A NAME by Nancy Campbell Allen. Penelope Timely has a terrible secret. She’s been writing letters to the Duke of Wilmington, pretending to be her ever-proper twin sister, Persephone. Now, the duke has written that he’ll be coming for the Autumn Masquerade Ball and Festival. Penelope will have to continue the charade while the duke is in town in order to protect her sister. The Duke of Wilmington isn’t fooled for a moment, but instead of confessing that he knows about the deception, he finds himself utterly charmed by Penelope and jumps into the game of deception to see how far the twin sisters will take it.

MUCH ADO ABOUT DANCING by Heidi Ashworth. Two years have passed since Lord Northrup declared his intentions for Miss Analisa Lloyd-Jones and forbade any other man to court her. Angry at the neglect, Analisa stopped reading his letters, never even breaking the seals. Tired of waiting, Analisa joins the house party at Mrs. Smith’s famous country home, determined to find a beau. When Lord Northrup unexpectedly joins the party, Analisa discovers she is no longer repulsed by the man who first laid claim to her hand.

SWEETER THAN ANY DREAM by Annette Lyon. Olivia Wallington is firmly established as a spinster, but that doesn’t stop her from dreaming about the perfect man. Ever since her father’s death, Olivia has been forced into seclusion by her mother. When her brother and his wife come for a visit, they discover the extent to which she lives under their mother’s thumb. With their help, Olivia sneaks out to attend a local ball, where she meets Edward Blakemoore. For a few divine moments, all of her dreams seem possible. But even someone like Mr. Blakemoore would be hard pressed to get past Mrs. Wallington’s fortress of protection — or past Olivia’s pride.

AN INVITATION TO DANCE by Michele Paige Holmes. Lady Ella has been isolated on her father’s estate since her mother’s death as her father travels the world. When Alex Darling arrives with a letter from her long-dead fiancé, and a demand that she travel to London for a series of engagements, Ella thinks her father instigated the strange demands and agrees. In London, she discovers the truth behind her fiancé’s death, and that new love might be possible in the arms of the most unexpected man. 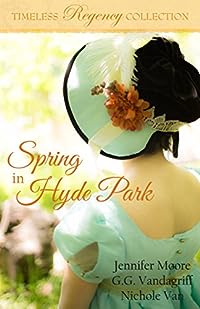 A HAPPY ACCIDENT by Jennifer Moore. Jonathan Burles father has just died, making him the new Marquess of Spencer and the most sought after bachelor in London. An unfortunate accident leads to a forced marriage to Maryann Croft, a young woman who possesses no title, and an unexpected secret. With the unstable beginning to their marriage, finding love together seems impossible.

THE DISDAINFUL DUKE by G. G. Vandagriff. Lady Saphronia Huffington has always thought of herself as plain next to the beauty of her sister, Lady Lavinia. So when her sister becomes engaged to Lord Gilbert Caldwell and Saphronia is paired for wedding events with his brother, the granite-faced Duke of Mayfield, who is known to prefer beauties, she sharpens her wit. Thus begins a lengthy sparring contest during which the Duke realizes Saphronia is anything but plain.

AN INVISIBLE HEIRESS by Nichole Van. Miss Belle Heartstone has everything money can buy — houses, servants, carriages, clothing, jewels. A husband, however, is proving much harder to, ehr… purchase. Colin Radcliffe, the newly minted Marquess of Blake, is in desperate need of funds — preferably of the wife-free variety. When circumstances draw the two together, Blake might be the only man able to see beyond the Belle’s outer façade, and fall in love with the woman inside.