The Guardians of Altana by Savanah James

Elves, druids, demons..OH MY! The Guardians of Altana by Savanah James is an action pack read fans of fantasy should not miss. With fascinating characters and a very well developed world, readers are sure to be hooked from page one. Enjoy!

Unleashed Shadows (The Guardians of Altana Book 1)
by Savanah James

A dark entity wants her soul.

When demons attack her kingdom, elven princess Ara Zypherus is forced to flee her palace with a band of her father’s most trusted soldiers. In that one night, she loses everything she loves.

All that remains of her previous life is her father’s commander, Raethin Corvus. Handsome but irritating, Ara must figure out a way to get along with Raethin, or risk losing the last thing she has — her life.

To escape the demonic scourge that hunts them, Ara and Raethin travel to the remaining mountainous kingdom of Waetherea through the labyrinthine Therilean Forest. But when the Kaevari discover them, it is the legendary Rakevan druids and their guardian that come to Ara’s and Raethin’s aid.

As truths are revealed, Ara discovers that she plays a central role to the battle against the dark entity known as the Void King. Together with Raethin and their companions, Ara must find a way to stop the chaotic god before he tears the realms apart.

This novel ends in a cliffhanger.
This was previously published under another pen name. This is the revised and rebranded version of “The Shadow Curse”. 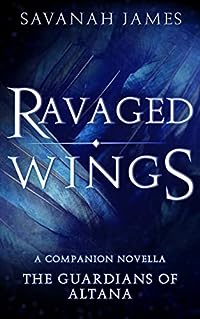 Ravaged Wings: A Companion Novella (The Guardians of Altana)
by Savanah James

He has three nights to return home.

Every thirty-three years, the raven god Iziran descends into the mortal realm of Thraes to commune with the people of the Visiel mountains. But this time is different. Demons ambush him and an old friend from an era long ago appears. With the help of a mortal, elven woman and the magi of the local village of Nilthil, Iziran schemes a way to save his people and return home before the last midnight, when the portal to his home realm closes and he’s trapped within the mortal realm. In the end, the demonic leader gives Iziran two choices: join forces with the demonic leader or die a mortal’s death.