Rise of the Discordant by Christina McMullen is a humorous urban fantasy series with a wide array of quirky but lovable characters that readers are sure to enjoy! 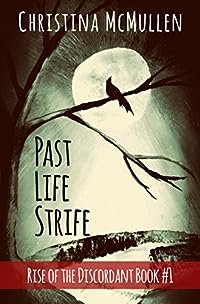 Welcome to Blackbird, a small Midwest town with a big paranormal problem.

As an Observer, Seth is tasked with identifying lost souls. An unenviable job under normal circumstances, but the situation takes a turn for the worse when Blackbird’s Guardian calls it quits. With no one to take her place, Seth finds himself partnered with Desmond, a powerful and intimidating Warrior, who sees the downtrodden Observer as a liability.

Desmond’s fears are all but validated when a magical disturbance draws even more Discordant creatures to the area, including a deadly femme fatale from Seth’s past, and Bogie, a demon with a heart of gold and a tenuous grasp on the English language.

To save Blackbird (and eventually the world), the agents must set aside their differences and team up with a ragtag group of local mystics. Together, they might win the day, or they just might make things a whole lot worse. 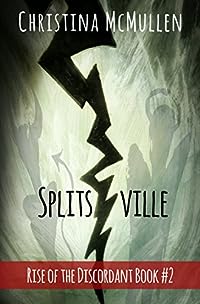 Splitsville (Rise of the Discordant Book 2)
by Christina McMullen

Jem and Nai may be twins, but as two halves of a split soul, they are as different as night and day. After losing their lives in a boating accident, the teens are recruited by Order to replace the recently departed Guardian of Blackbird. Their job? To protect and save the souls of the lost before they fall to the Discordant. A simple task under ordinary circumstances, but the town of Blackbird is far from ordinary.
It would be bad enough if their arrival simply coincided with that of a wraith, a rare and nearly impossible to catch Discordant. But the teens must also contend with souls that won’t stay saved and adults who don’t trust them, all while keeping up the appearance of normal high school seniors. And just because the universe hadn’t finished piling it on, a local mystic reveals that the twins’ worst enemy may be each other.
Jem and Nai soon discover that they are just as anomalous as the town they have been assigned to protect and can’t help but to question the supposed infallibility of the Creator. After all, who in their right mind would put the fate of the world into the hands of teenagers? 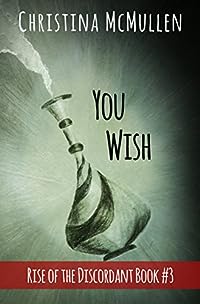 You Wish (Rise of the Discordant Book 3)
by Christina McMullen

After a scuffle with his sister smashes the bottle he found at the antique store, Jem becomes the not-so-proud owner of a wisecracking djinn who promises to make his every dream come true. The cost? Nothing less than his soul. But Jem is no ordinary agent and falling to Chaos means bringing about the end of the world.

Meanwhile, Desmond discovers that a crack in the barrier between realms has opened below the site of the old paper mill and grows wider each day. The solution to both problems may lie with Eller Raglund, a powerful, yet antisocial mystic. But before he can help, Eller must reconcile his own paradoxical problems.

One way or another, it seems Blackbird is going to become the battleground in the final fight for Order. The question is, how soon? And more importantly, will the gang survive long enough to see the grand opening of Big Royal Burger? 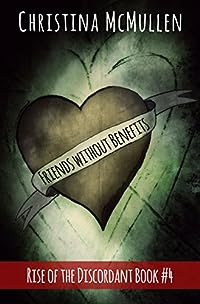 Donna’s love life is at an all-time low. Despite breaking her family curse (ensuring she would not give birth to the demon spawn destined to bring Chaos to power), she still can’t get a date. Worse, the incubus who was supposed to sire the all -powerful demon spawn won’t leave her alone. But instead of keeping her up all night with passionate dreams, he just wants to talk.

Meanwhile, the fissure that appeared under the site of the old mill grows wider each day. Desmond is running himself ragged trying to prevent the weakening of the barrier between realms. As such, he accidentally lets slip Seth’s identity from a previous life, bringing about rift of a different sort. This one between the two agents of Order.

As winter approaches, it is no longer a question of if the Discordant will rise up and try to claim Blackbird, but rather how soon? Will the agents and mystics be able to put aside their own personal issues long enough to vanquish Chaos or will Order crumble? And perhaps the most pressing question of all: Is Big Royal Burger even open yet? 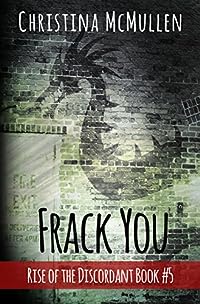 Frack You (Rise of the Discordant Book 5)
by Christina McMullen

The portal between the realms has been torn open. With thousands of Discordant rushing the gates, Blackbird is about to play host to the end of the world. The usual swarms of vampires, pixies, and other creatures of Chaos would be bad enough, but a rampaging dragon threatens to turn the town’s unsuspecting citizens into soulless puppets.

Humanity’s only hope lies with the agents of Order and Blackbird’s mystic community. Together, they must banish the threatening hordes and close the portal for good, but with their numbers imbalanced, this won’t be an easy task for the ragtag group of unlikely heroes. Before the night is over, each will have to face not only the countless Discordant, but also their own fears, shortcomings, and the personal issues holding them back. Win or lose, none will walk away unscathed, and all will discover there is more at stake than just the fate of the world.

Frack you is the final chapter in the Rise of the Discordant series.